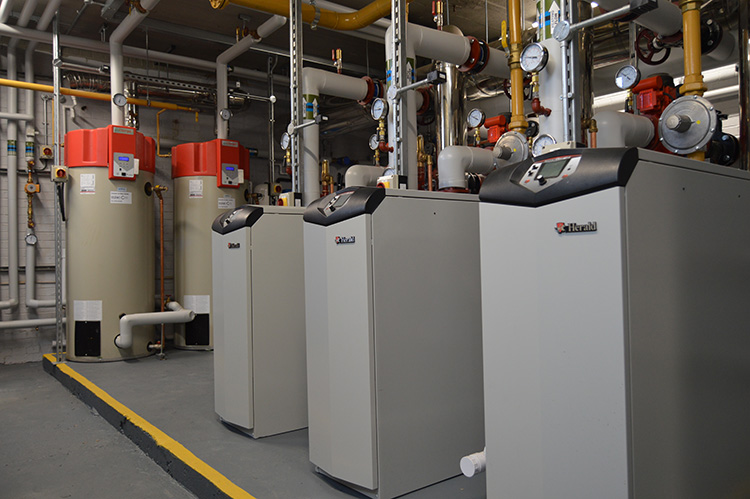 Replacement of ageing cast-iron gas boilers and atmospheric gas water heaters in the plant room serving the main school building. This was the second phase of an overall plan to upgrade heating and hot water plant throughout the school

Boilers and water heaters from Lochinvar are playing an important part in a project designed to mark the 600th anniversary of one of the country’s oldest schools.

The Royal Latin School was founded in 1423 to teach boys the ‘Trivium’ (Latin grammar, logic and rhetoric) in Buckingham. It received royal status in 1597, at which time it was required to teach six boys, and it started admitting girls in 1907.

It has subsequently moved to two different sites with its current campus opened by the Queen Mother in 1963. As its 600th anniversary approaches, the school has embarked on an ambitious three-phase development programme to provide a new science laboratory, which was recently opened by Professor Robert Winston, a sports campus and to substantially upgrade many of its other facilities.

The school started the process of upgrading boilers and water heaters in summer 2018, and the first phase included the installation of two Lochinvar CPM wall-hung condensing boilers, to provide the heating for blocks two and three.

The main school building was the focus of phase two, and was completed in late summer 2019.  Lochinvar provided three Herald boilers along with two EcoCharger water heaters as part of a major plant room refurbishment to provide the required amount of heating and hot water – or as the original pupils may have described it: “calefacientis” and “aqua calida”. The main building includes classrooms, dining hall, assembly hall, offices and kitchen.

Each model in Lochinvar’s Herald range features a heat exchanger manufactured from 316L stainless steel; a material, which is becoming increasingly popular because of its natural resistance to corrosion. Herald boiler heat exchangers are supported by a 10-year warranty.

Herald boilers are also well suited to replacing old boilers thanks to the location of the flue outlet low down at the rear of the unit. They are also capable of working at high operating pressures of up to 11bar and can deliver temperatures up to 88degC at Delta T of 30degC.

There are eight different models in the EcoCharger condensing gas-fired water heater range so they can be used in a wide range of projects. They come with multiple flue options and are particularly suited to applications with peak hot water demand periods, which is why they were chosen for the school by the specifier and system designer Paul Bailey of PSB Consulting Engineers.

PSB Consulting Engineers are a regular specifier of Lochinvar products and particularly favour the Herald boiler’s stainless steel heat exchanger because of its robust construction and reliability. Luton-based CME Heating Ltd carried out the installation and, since the work was completed, the school has reported substantial savings in fuel consumption.