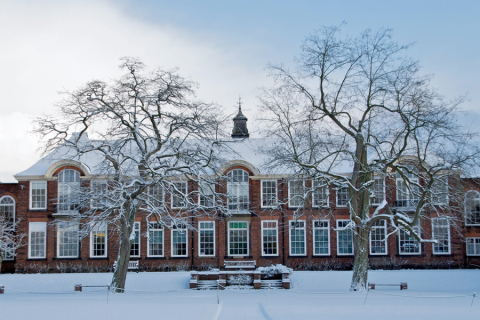 Sitting on the banks of the Ouse within sight of York Minster, historic St Olave’s School is one of the North of England’s leading junior schools.

Founded in 627 and sitting in 47 acres of well appointed grounds alongside its famous senior school St Peter’s, it has a glowing reputation for academic excellence. Many of the senior school’s pupils go on to top universities including Oxford and Cambridge.

However, the heating and hot water strategy for St Olave’s was giving estates manager Graham Fennell cause for concern. He was unhappy that during the summer months the school’s two ageing 800kW boilers needed to be fired up just to provide hot water.

As a result two EcoShield condensing water heaters from Banbury-based manufacturer Lochinvar have been installed alongside the boilers. Although the pupils are on holiday, the school premises remain in great demand during the summer and by fitting the Lochinvar water heaters, Mr Fennell believes he now has a much more efficient system.

He said it was already clear that the new arrangement would make a huge difference to the school’s running costs.

“The boilers are very old – I’d hate to say how old – and British Gas has done a great job in keeping them running for us over the years, but they are not particularly efficient and it was crazy having them running just to provide hot water,” he said. “Improving our energy efficiency was the most important thing for me and we have definitely achieved that with the Lochinvar water heaters,” said Mr Fennell. “Reliability is also a key consideration.”

“The installation went very smoothly and was overseen by British Gas. The water heaters are already providing hot water for showers and for our busy cookery classrooms,” said Mr Fennell.

An additional benefit for the school is that it will be able to keep the main boilers switched off even after the children return for the new term. “We won’t need to turn them on until the weather gets colder,” he said.

Lochinvar’s EcoShield range of floor-standing, water heaters are fully condensing and can achieve efficiencies up to 97.8% gross with low NOx emissions. They have fully modulating burners with 5 to 1 turndown and multiple flue options for ease of installation.

There are five EcoShield models, with storage capacities from 333 to 454 litres and recovery rates from 709 to 2,436 litres per hour based on a 50degC temperature rise. The integral storage vessel is covered by a 5-year warranty.