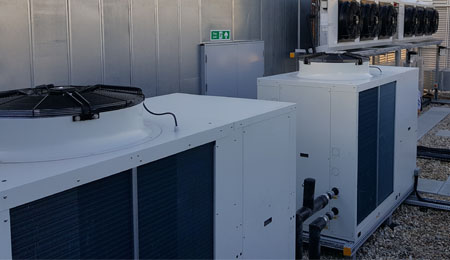 Air source heat pumps supplied by Lochinvar are playing a key role in meeting the renewable aspirations of a new BREEAM ‘very good’ rated £35m office building on the banks of the River Thames.

Tamesis One was developed by BAM Construction for Royal London Mutual Insurance Society in Egham, Surrey and was designed by Scott Brownrigg Architects. It provides 11,600 square metres of office space over five storeys as well as a 300-space car park and new landscaping.

The steel-frame building is situated on a flood plain, but the ground floor was raised and the car park designed as a reservoir for floodwater as part of a plan to give the whole site 100-year flood resilience.

The new building, which features an impressive naturally lit central atrium, replaces an outdated 1980s office block that was demolished to make better use of the heavily restricted and previously under-used site. The innovative design was recognised by the British Council for Offices (BCO), which presented it with a regional Corporate Workplace Award.

As well as the offices, which are now the European headquarters of a major research company, Tamesis One includes a restaurant and gym so has high hot water demand. This was a key consideration for the building services consultant Foreman Roberts.

Low carbon
Foreman Roberts were also keen to include low carbon, renewable technology in their design and so two Amicus Air Source Heat Pumps from Lochinvar were specified along with a 1,055 litre capacity storage vessel and associated ancillary equipment.

The Amicus heat pumps are installed on the roof and provide all hot water requirements for the tenant fit out, including  the restaurant and gym facilities. Each Amicus unit has a heating capacity of 64Kw and back-up is provided via electric immersion heaters. Space heating requirements are provided by a separate VRF system.

There are 17 models in Lochinvar’s Amicus range delivering heating capacities from 7.7kW up to 210kW making them suitable for a wide range of projects from large residential to industrial applications.

They are also capable of delivering flow temperatures up to 63°C for hot water applications and can operate in outside temperatures as low as -20°C. They can be used as stand-alone replacements for conventional heating products or as part of an integrated system providing pre-heated feed water to gas-fired condensing boilers, water heaters and thermal stores in buildings with large heating or hot water demands.


"My team and I are always striving to provide Industry leading support and customer service."


Please contact our long-established business partner EuroGas for all enquiries coming from Ireland.